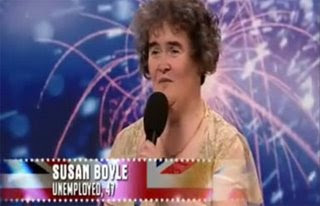 Susan Boyle -Britains Got Talent 2009 - Susan Boyle
Susan Boyle: Just Who Is The Singer Susan Boyle?Unless you live under a rock, you know about the Scottish woman who has taken the industrialized World by storm: Susan Boyle. Ms. Boyle, who appeared on a reality TV show called "Britains' Got Talent" last Saturday, April 11th and wowed a cynical audience and the judges, including the irascible Simon Cowell (also of American Idol) with her powerful performance of "I Dream A Dream" from Les Miserable has took the World by Internet storm. What surprised millions - and does not make a great statement about our World industrial culture but is a great example of the power of online video distribution as the video has been seen over 15.9 million times on YouTube (I counted over 10 videos with over 200,000 views) as of this writing - is that someone who looks like her could sing like that. But who Susan Boyle is as a person is a story of a good simple woman winning over …
Read more
More posts